2013 has been a very important year for Your Favorite Enemies. So many things have happened. As we were talking amongst us, we realized (once more!) how mixed up in time we were. Events that happened a few months ago felt like they happened years ago. Yet, as we were discussing them, we couldn’t help but feel that they were still so close to us. The memories and emotions shared don’t lie; all of these special moments shared with you are still vivid and alive in each and everyone of us, having become a part of who we are, impacting us on our life long journey.

And to be able to share all of those moments in the Bla Bla Bla: The Live Show is one of my greatest joy every time we plan a new show. To be able to bring you in the YFE universe in such a way, making you feel as if you were right there with us, is an incredible privilege. Because you truly are with us at every minute… You may not always know it, but you’re such an important part of everything that is going on here… 🙂

Here are gathered for you the best moments of 2013, as shown to you through the Bla Bla Bla: The Live Show! They aren’t numbered, and I have tried to keep them in chronological order. I was unable to rank them, and I figured that having so many #1 wouldn’t be convenient… 🙂

What were your best Bla Bla Bla moments? Let us know about them!!!

Recording Between Illness And Migration – January 2013

The beginning of 2013 has been marked by the completion of the band’s most recent album, “Between Illness And Migration”. A journey in itself, we didn’t know exactly where this album would lead us. We’re still walking on its path, one day after the other, and discovering it with you through your eyes. We knew it would be an adventure, but we never could envision its size…

Mixing Between Illness And Migration – January 2013

Once the recording of the album has been finished, all the band members as well as some people from the crew went to New York City, where there would be a long series of interviews, photo shoots, and of course, where the album would be mixed. As “Between Illness And Migration” meant so much to every one already, that the person mixing it needed to be the right one. There was no gambling with what was on the line; the heart and soul contained in this music. And this his how we started mixing with John Agnello, who infused the music with the perfect amount to give it the dynamics and different layered perspectives the band members knew there were in each and every one of these songs…

Release of “Between Illness And Migration” in Japan – March 2013

On March 20th, the album “Between Illness And Migration” would be released in Japan. Released in different countries at different times, Japan was the first place to welcome the band’s new album. The album came with an exclusive bonus track, as well as a specific artwork, specifically designed for Japan. 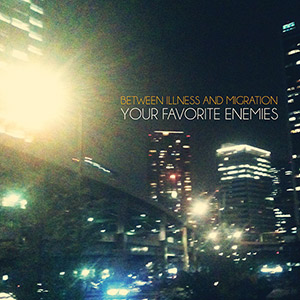 An exclusive and summertime limited collection, the Heart of Gold collection was the promise of a longtime awaited spring, a forgotten whisper that bloomed into the uplifting accomplishment of a new summer birth, filled with the envisioned faith of a graceful renaissance… And this promise has been embraced by many of you, making this heart of gold one that was even shinier than we thought it could get.

Along the last Bla Bla Bla episodes, we also discovered that, no matter how talented the band members were, they did have some interests outside of the music sphere, too. Those sides of them aren’t always shown in broad daylight, and some keep them as little secrets from the rest of us… Or well, they at least try to keep them secret, going as far as denying their own identity!

We’ve also discovered Moose’s passion for haircare. Well, for each and everyone of you who already waited to get into the shower after Moose, you probably all knew how much care he put into his hair… But to know that he also had his own hair product line and appeared in advertisement for it, that caught us all by surprise!

And how could we not talk about the live performance that we had at the end of the 16th episode? Those live performances are always special moments that we share with you, and it’s always a very special privilege to live those with you! Kerosene is the latest performance the band did on the set of the Bla Bla Bla, and it was offered as a free download (get it here!). The moment the band members shared on the set, away from the camera, has been a very special one, as just before they entered the set again, they hugged together, a hug that lasted for a long time, and that meant more than just “congrats! that was a brilliant performance!”. It communicated their love for one another, and this privilege they have of having each other.

In May, the band embarked on their “Youthful Dreams Of An Old Empire” tour, that would bring them to UK, France and Germany. It had been 5 years since the band members had not played on the old continent, so you can imagine that words don’t describe the joy they felt as we announced we were going back to Europe! And that joy was shared with people from all over Europe… The concerts in themselves have been unique moments every night the band played. But a tour would never be a tour without its hardships… Here are a few of them!

Another project to be released this year was the vinyl “Sacred Kind Of Whispers”. If you don’t already know it, Alex is a fan of vinyls, and owns a very large collection of them. “There’s nothing like the sound of a needle on a vinyl” is something he says very often! For them, being able to release one of their album on vinyl was dream they had caressed for a very long time, and they were utterly happy to finally be able to share it with every one of us! The vinyl came in 2 different colors, clear orange and green (exclusively available for the SFCC members)

June 2013 also marked the end of the year long project in which we revisited the archives of the band, as we celebrated the 5th anniversary of the band’s very first self-produced EP “And If I Was To Die In The Morning… Would I Still Be Sleeping With You”. And because you have asked it so much, the band decided to re-release the EP in its original format, along with the t-shirt they wanted to do 5 years ago but couldn’t. Between printing a t-shirt and eating, the choice is heartbreaking, but quite simple! And let me tell you, they were ecstatic at the simple idea of finally being able to do what they had dreamed of for so long… Like what dreams never die!

Already released in April, and very well received by all of you, we also decided to print some more item of the Heart of Gold collection, due to popular demand! The simplicity of the design was evocative, and you all really embraced the spirit behind it, making it a summer favorite! We released 2 new t-shirts, a white and a gray one, which were introduced in a very uncommon fashion!

On June 26th, Your Favorite Enemies’ fan club, the Secret Family Cult Club, also known as SFCC, turned 3 years old! Asked by the fans, this community has been very dear for the band members, a place where the only pressure you have is to be yourself… A little later, the packages for the 3rd year of membership would be shown to all of you!

And the day of the 17th edition of the Bla Bla Bla: The Live Show is also the day we premiered the official video clip for the song “A View From Within”, first single on the album “Between Illness And Migration”. The video has been filmed in Japan, and shows the band’s unique ability to touch both ends of the emotional spectrum without any compromising detours… it’s clear, it’s for everyone to find their way now.

Along with their new video-clip, the band also released the EP “Youthful Dreams Of An Old Empire”, which features the song, as well as a t-shirt that illustrates the cover of the album. Not exactly the “usual” way of doing things, the album was released digitally only at first, but after people asked Alex to have it as a hard copy, well, it happened. And when they asked to also get a t-shirt, well, it also happened! So you pretty much get the point… You know how it works, and you know we do listen to you!!!

Release of Between Illness And Migration in Australia – September 2013

After having been released in Japan, “Between Illness And Migration” was released in Australia in September 2013. The same vibe and spirit obviously surround the songs, and the spark that gave life to the album cannot be changed, but the artwork was completely changed to fit Australia and the different moments we shared with the people over the years, to represent this very unique bond that ties Your Favorite Enemies to the people in Australia.

Following the release of their album, the band headed to Australia for the very first time, where they would play around Brisbane and Sydney! This first trip Down Under was a very long one, but one that we will remember for all our lives! This tour has all deeply impacted us, thanks to the people we met wherever we went and performed. It won’t be long before we are back again!!!

The band then left Australia to go straight to Japan (with a short transfer in our beloved China!), where they performed for the 3rd time. It was the band’s first appearance in Japan since the release of their album in that country. They performed in Osaka, Kyoto and Tokyo, where glimpse of eternity took place every night they played. And before leaving, Alex wanted to make sure they would be ready for the country, by making sure the band members would all get used to the food over there!

A quick stop home to see the rest of the crew, and the band was back on the road, going back to England, this time invited by the Kerrang! magazine for an exclusive photoshoot & interview, and where they performed twice in London. They promised earlier in May that they would be back in the country pretty soon. Needless to say, Your Favorite Enemies are true to their words!

And on November, we released the official video clip for the song “I Just Want You To Know”, second single of the album “Between Illness And Migration”. The video clip has been filmed on several locations across Australia and Japan while the band was touring over there.